Scientists are identifying routes suitable for trains with alternative propulsion 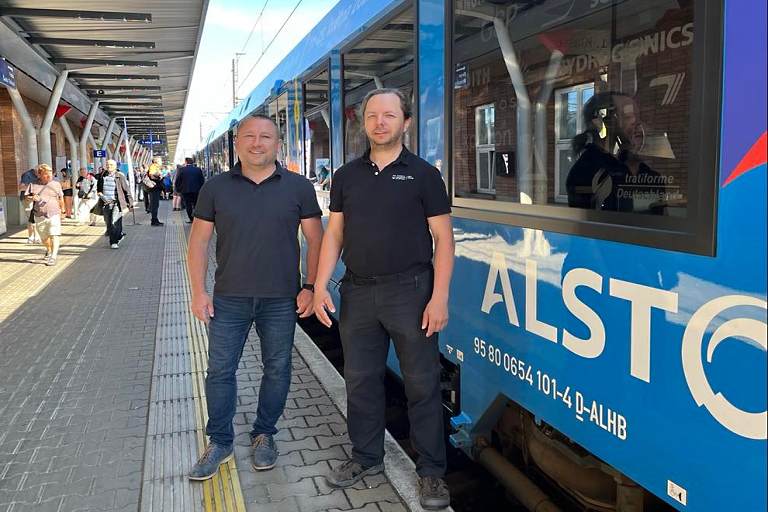 The first hydrogen train crossed the Czech Republic on Thursday; it travelled on the line from Olomouc to Opava. It is no coincidence that Lukáš Prokop and David Seidl from the ENET Centre, which is part of the Centre for Energy and Environmental Technologies (CEET) at VSB-Technical University of Ostrava, were among the passengers on this profile-raising ride.

Both scientists, together with other colleagues, are working on a Technology Agency of the Czech Republic (TA CR) project, one of the aims of which is to design a methodology for preparing infrastructure for trains with alternative propulsion. They admitted, it was their first ride on a hydrogen-powered train!

“Our task is to assess which lines in the Czech Republic are suitable for hydrogen or battery trains. This is a complex issue where a number of factors need to be assessed. From the length of the line, its technical parameters, the economic requirements, the possibility of building filling infrastructure in a given location, or finding space for the construction of technology for hydrogen production,” said Lukáš Prokop. The findings will be used by line operators, customers of passenger or freight transport, and individual carriers.

A promotional ride on Alstom's hydrogen train came in handy for the researchers. “The train ride will show us what the actual hydrogen consumption is on specific lines. From this, it can be determined how much hydrogen is needed to run the hydrogen trains, and also where it is appropriate to build filling stations,” Prokop explained.

But hydrogen for powering trains is not the only possible alternative solution on the railways. Battery trains, which are recharged under the tracks, are also an option. “You have to consider very carefully when to use one option or the other. So far, it seems to us that the use of hydrogen trains is appropriate for longer lines, as they cover a greater distance on a single filling than a battery train. We are talking about up to a thousand kilometres, whereas with battery trains we are talking about a range of hundreds of kilometres. At the same time, we are not saying that hydrogen trains will save rail transport. They are certainly suitable on some lines, but it is necessary to find a way to produce sufficient hydrogen using green technology. This is also a topic we are addressing at CEET,” David Seidl pointed out.

The two-year project entitled Reducing Energy Consumption and the Negative Environmental Impacts of Rail Transport Through the Preparation of Infrastructure for Trains with Alternative Propulsion will last until December 2023. Its application guarantor is the Moravian-Silesian Region, which has the ambition to introduce hydrogen trains in the region as one of the first in the country. Several projects are in the pipeline within the Region, with Veolia's intention to build a hydrogen electrolyser at the Krnov heating plant probably the most advanced of these.

The researchers are working on the TA CR project in cooperation with Správa železnic, the state-owned provider of national and regional railway infrastructure, who initiated the research. Správa železnic approached CEET staff because of their experience with hydrogen technology. CEET's hydrogen laboratory is also used for their development and study.