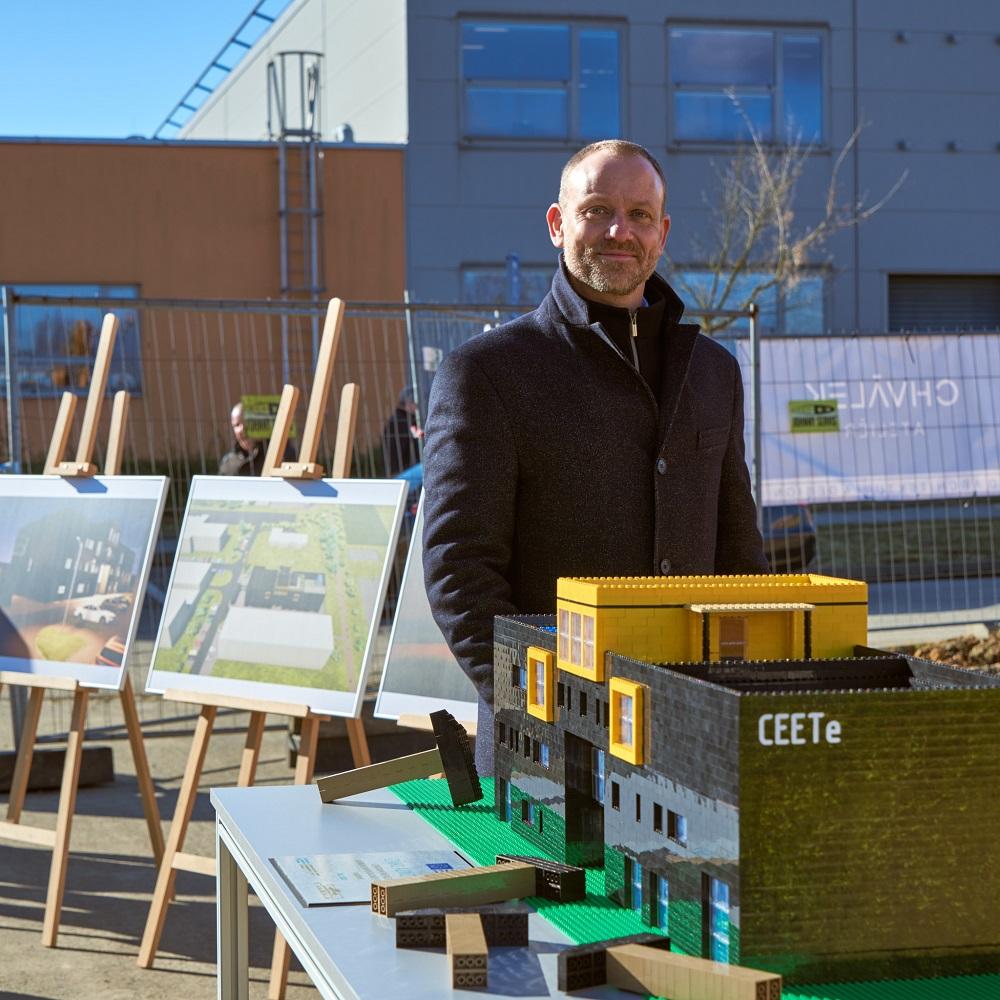 Representatives from the Centre for Energy and Environmental Technologies (CEET) at VSB-Technical University of Ostrava (VSB-TUO) have launched the construction of a new unique CEETe building, which aims to assist industrial entities with the transition to low-carbon energy sources in accordance with the European Green Deal.

The building, made up of individual modules, will provide facilities for research into technologies and methods that can bring waste back into play as an alternative fuel, extracting useful forms of energy and chemical products from it. The CZK 350 million investment is due to be completed in autumn 2023.

“This is a unique solution not only in the Czech Republic but also in Europe. Most foreign research centres are solving only certain parts of the problems related to the transition from the age of fossil fuels to clean energy. We, on the other hand, can build on interdisciplinary research and the interconnection of all parts of CEET and other departments of the University. Thanks to this, we have technologies that can ensure the conversion of waste into useful forms of energy, store this energy in the short term, and then use it,” said the new CEET director Stanislav Mišák summarising the objectives of the new unit.

Scientists inspired by Wall-e robot, but CEETe won't be sci-fi

The Centre for Energy and Environmental Technologies explorer (CEETe), will be a mobile explorer that will come up with pioneering solutions. The main purpose of the project is to install unique combinations of technologies for thermochemical conversion of alternative fuels and methods for energy storage and distribution to ensure energy self-sufficiency, including a hydrogen economy. The full-scale unit, which will have all the facilities for research, from basic to applied, will be built on the premises of VSB-TUO. Since the system is assembled like a Lego set from individual modules of the same size, it will be relatively easy to build its components "tailor-made" in other locations, offering services to solve specific problems.

“CEETe may be inspired by a movie robot, but in this case it's not sci-fi. In a very short time we want to show that the issue of alternative energy is feasible for the whole country. We would like to apply the solution in different locations in the country where there are problems with waste, a lack of energy, or the need to generate certain chemical products such as hydrogen. According to CEETe, we are also able to design a solution within a month, for example, for the remediation of a landfill or for the construction of a chemical plant,” added Mišák, who said that the project will also include education in the field of circular economy, energy use of alternative fuels, rainwater management, and energy flow management.

The services will be used by companies and the public sector

The project is a shining example of cooperation between academia and industry. However, it will also offer services to the public sector. This is at the request of the Moravian-Silesian Region, a partner of the project.

“In the Moravian-Silesian Region, as a traditionally industrial region, the energy sector is of particular importance. Its transformation, which is designed to reduce greenhouse gas emissions and ensure our climate neutrality, affects coal mining, but also for example energy and heat producers, the metallurgical industry and engineering. The new research centre is intended to help preserve our energy stability and will, among other things, investigate new energy sources. I am delighted that scientists from our region are at the forefront of these activities,” said Ivo Vondrák, Governor of the Moravian-Silesian Region.

According to Jakub Unucka, First Deputy Governor for Energy and Smart Region, the Moravian-Silesian Region was a pioneer in using natural gas to power hundreds of regional buses a few years ago. “And it intends to do the same with hydrogen. We are serious about our vision of a hydrogen valley, we are finalising our hydrogen strategy, and we will become a leader in the use of hydrogen in transportation and community energy. The first hydrogen-powered buses should start running next year in the Havířov area, while the use of hydrogen on railways will be tested in Krnov. We are doing everything we can to ensure that even bin lorries will run on hydrogen in the future. All of this would not have been possible without the professional cooperation of experts from VSB-TUO, which is why the Moravian-Silesian Region supported the establishment of the CEETe research centre and confirmed further cooperation in its construction by signing a memorandum. I believe that the centre will verify in practice the technologies that will make our vision feasible,” said Unucka.

Benefits not only for the Moravian-Silesian Region

The research infrastructure has also been designed from the beginning in close cooperation with potential customers of the planned services to meet the current needs of the application sector, especially in the areas of energy, metallurgy, engineering, transport, ICT or waste, and water management.

“Cooperation with a research centre with a strong focus on the application of results in practice is very much appreciated. We believe that only with this approach will we truly meet the needs of the industrial sector which will also be beneficial for the Moravian-Silesian region,” said Jarmila Dedková from ATEKO a.s., which is participating in the project as a supplier of some of the installed technologies and cooperates with the research team in development. A comprehensive view of alternative energy sources, their conversion and subsequent use, including storage, is an important addition to the project, as is a modular approach to energy sources and their processing. “Modularity and the ability to use energy sources according to the customer's local capabilities are key parameters for tailor-made technological solutions. It is this direction that our company is trying to apply in its commercial activities,” she added.

The construction of CEETe will be financially supported by the Ministry of Industry and Trade under the Operational Programme Enterprise and Innovation for Competitiveness, with a subsidy of approximately CZK 208 million. The Moravian-Silesian Region will also contribute approximately CZK 50 million from its budget. The rest of the funds will be provided by CEET, a VSB-TUO institute, which was established by merging four university research centres with the ambition of becoming a leader in energy research in the Czech Republic. Its mission is to promote raw material independence and energy use of alternative fuels, the development of energy self-sufficiency and security for the Czech Republic using the results of science and research.